bgo started off as a bingo provider but transitioned into a full-blown casino in around 2012. It has grown further since then, with a high-profile media campaign in the UK starring the late Verne ‘Mini-Me’ Troyer attracting a lot of attention. It has now cemented its reputation as a favourite among British game players for a number of reasons, as outlined below.

How we rate casinos

Very often with online casinos it is the number of games that attracts all the attention. The more games a site has the better it is deemed to be. However, a more accurate reflection of its status should perhaps be the kinds of games it features. It really is more about quality than quantity. However, it is possible to combine a great range of games with sheer numbers, and that’s what BGO manages to do.

bgo boasts an impressive almost 600 games, including titles by some of the biggest developers around. The majority of the games come from Playtech, but there are also titles from NetEnt and other major developers. These include some of the most popular casino titles on the market.

The bulk of the games are video slots, with popular titles including Gonzo’s Quest, where you delve into the jungle in search of lost treasure. The choice of more than 500 slots games includes classic three- and five-reel slots. The most popular games on the bgo site include Starburst, Age of Gods, Bollywood Story and White King.

If you are looking to play something other than slots, then there is still plenty on offer. There is a good selection of casino games for all levels of player. They include roulette and blackjack in particular, but also craps, poker and baccarat. There is help and advice for novice players and some generous betting limits for those who are more advanced. However, it must be said that compared to some of the other bigger online sites, the choice of table and casino games might be considered small.

As with most of the larger casino operators, you also have the chance to play live games, with a choice of roulettes, blackjack, baccarat and Hold’em poker. The live games are provided by Playtech and feature a professional croupier running the tables. 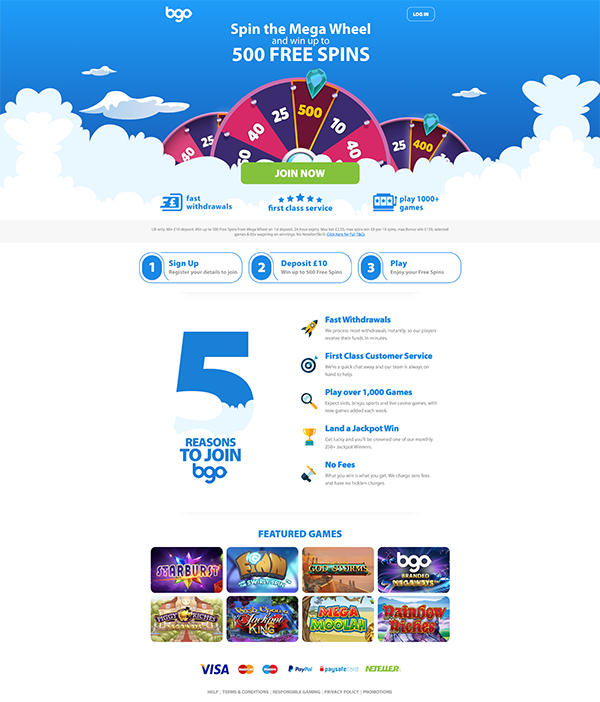 The bgo site is available to play on a choice of devices. This ranges from PC right down to mobile phone, with everything in between covered too. The mobile app is pretty comprehensive but, of course, doesn’t feature all the games and bonuses you can get on the main site.

The overall site design is nice to look at and just as easy to use. You can quickly scroll through the major games options and see all the current offers, top games, live casinos and jackpots without too much fuss. However, the bulk of the other games are separated into categories. This can make finding genres a little tricky, but if you know the exact name of the game you want then you can use the search function. Most of the games and game software has been provided by Playtech, which is a large provider and delivers the quality you would expect. The software from the other developers, like NextGen and IGT, is also of a superior quality.

There is no download option, so all games need to be played through Flash player, but as long as you keep this up to date you shouldn’t have too many problems.

There are three main ways of getting in touch with bgo. These are chat, email and phone. Most email enquiries are responded to within a couple of hours and the phone and chat services are available between 8.30am and midnight every day. If you need a quick answer then the chat service is probably your best option, as usually someone will help you within a matter of minutes.

The site holds a licence from the UK Gambling Commission and so it adheres to the strict guidelines that they have in place. The website also features a 128-bit SSL, which is the latest encryption technology and helps to keep all your information safe. There are various secure ways to pay, including PayPal, Skrill, Neteller and secure card payments.

With a huge range of quality games from leading providers and an excellent live casino option, bgo has a lot going for it. The good security options mean you can play without having to worry about data breaches or online safety. The main design is good, with just a few navigation issues when searching for specific types of games, but scroll a little longer and you can generally find what you are looking for. Plus, with plenty of free spin promotions, you can have lots of fun when you sign up.

PLAY-SLOTS.COM IS AN INDEPENDENT PROVIDER OF ONLINE CASINO REVIEWS AND INFORMATION. WE HAVE NO DIRECT RELATIONSHIP WITH ANY GAMBLING OPERATORS, MEANING YOU GET NOTHING BUT TRUSTED REVIEWS AND GUIDES ON CASINOS AND SLOT GAMES. - Gambling SEO by SEO NORWICH